September 17, 2021, Nurulina Hakim, one of English Education Department students has attained an honorable achievement. She was awarded as the best graduate in Universitas Lampung, bringing up the name of her own department. Nurulina completed her study in 3 years and 8 months with the GPA of 3.69. She was not only acing her grade, but also active in several organizations and English contests.

She had conveyed her thoughts on being the best graduate in our interview on Saturday, September 18, 2021, which uttered as follow:

“I feel honored, obviously. I could not believe it since I was insecure about my GPA. So, it is still beyond my consciousness, but still, I think I deserve this position.”

She also stated that being part of an organization has helped her in developing herself and triggering herself to strive for the best.

“I could say, my organization (English Society Unila) affects most of my achievements. I actively participated in many events, as the participant, committee, head, or other staff. It gives me chance to be an active student, to introduce Unila through events that we made or achievements that we gained. I think becoming a student that is proud of my university or that is willing to be known by other people from other universities, become my trigger to be participated in any kind of events (particularly English competitions) that make my university’s name vibrant. In addition, I also learned how to balance my time to be active in the class and improving my skill in the organization. 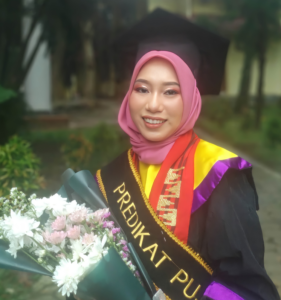 I was disappointed of my first GPA (3.28) and thought it might be my end of the university life. But, when I started to think that my journey is not finished yet, I furiously crawled to the top conclusion that I would be famous with my achievements, no matter how hard that would take. I finally joined 2 organizations, I actively delivered my aspiration, that I want to be anything to fix my image. The table’s turned. I suddenly became an active student surrounded by ambitious people. Here, I realized, the achievement that I expected was a big score of GPA, but what I got was lots of participation in any kinds of events and met new people that do not have the same background but have the same dream to achieve as many good things as possible. And you might guess “You didn’t improve your GPA, did you?” I did. You should know that a good circle drives you to be good. Even though my GPA was less than most of my classmates (3.69) and one of the lowest GPA of the best graduates in the 6th period, my achievements and participations became my path to become the winner.

Thus, I understand why the university gives more respect to the students who have a lower GPA (still >3.5) but have many achievements, because most of the people just own the score without making any experiences to contribute for the university. So everyone, be active, not for yourself only, but for your university, or better the society.”

Reflecting upon her words, hopefully the youth, especially English Departments students are triggered and empowered to strive toward excellence.

SEEDS Is Back With A Fun Webinar: Visualize The Future

Getting Ready with IELTS